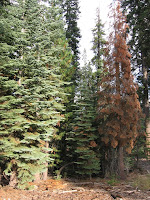 By Michael Wall at Wired.com
Trees in western North America are dying at faster and faster rates, and climate change is likely to blame.
The mounting deaths could fundamentally transform Western forests because tree reproduction hasn’t increased to offset losses, according to a new study published Thursday in Science. And new seedlings aren’t rising quickly enough to fill the gaps.
“If current trends continue, forests will become sparser over time,” co-author Philip van Mantgem, an ecologist with the U.S. Geological Survey, said in a press conference call. This would be a setback in the fight against global warming because thinner forests with small, young trees store less carbon, so more heat-trapping carbon dioxide would cycle into the atmosphere.
A large-scale transition to such threadbare woods would have other negative effects as well, van Mantgem said. Species that depend on big stands of old growth, such as marbled murrelets and spotted owls, would have much less room to roam. And the risk of catastrophic fires would go up with more dead, dry wood lying around to fuel it.
The evidence is mounting that warming and drought are changing ecosystems across western North America. Other studies have documented major tree die-offs and surging wildfires. Plant species have climbed uphill, and bark beetles are laying waste to ever-increasing tracts of woodland.
The new study “adds to the list,” said Michael Goulden, an ecologist at the University of California, Irvine who was not involved in the research. “Something large and important is happening to Western ecosystems, in correlation with climatic shifts.”
The research revealed that tree mortality rates in old-growth forests from southern British Columbia to Arizona have doubled every few decades over the past 50 years.
See entire story.
Posted by Tom Sebourn at 11:48 AM