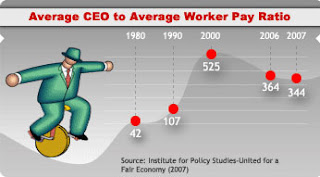 This is from Thinkprogress.org
According to a new AFL-CIO survey of 946 companies, last year, 480 executives received pay raises, while 463 received pay cuts. Furthermore, the “median CEO salary rose 7 percent in 2008. CEO perks at the companies surveyed also went up, nearly 13 percent to an average value of $336,246, according to the survey. Of CEOs whose compensation increased, the average was $5.4 million, including salary, bonuses and stock options.” Today, the AFL-CIO also launched a new Executive PayWatch site.
Wow the Clinton Administration sure did a lot for CEO pay according to this chart.
Posted by Tom Sebourn at 1:06 PM