Who will be the next U.S. Dictator? 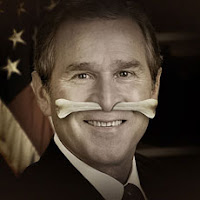 Who will be the next U.S. dictator? The current president has put into place everything he needs to be a dictator. With the circumventing of the U.S. Constitution, the kingdom set up in the vice presidents office and no accountability to congress, the next president will inherit these awesome powers. Powers to wage war without declaring one. Powers to spy on their opponents. Powers to enrich their buddies and their companies. Powers to ignore the U.S. and International rule of law. Powers to lie to the world. Powers to destroy the American middle class. Powers to put people in jail without charging them with a crime. The list goes on and on. What we need to consider when we vote for the next president is, what type of dictator do we want? The next president could nationalize the oil companies or take over another country that has oil. What type of dictator do we want? John Mc Cain as dictator? Barack Obama as dictator? I would have to admit that in a country run by a dictator, I would rather have someone that cares about the poor and middle class, someone with optimistic rhetoric than a pessimist war monger. No matter who we vote for, the possibility that radical change could be ahead has been made possible by George Bush and Dick Cheny. It is unlikely that the next president will give back the awesome power that has been stolen by the current administration. It is something that should be considered this November.
Posted by Tom Sebourn at 5:11 PM