Is the DEA using Blackwater Mercenaries? 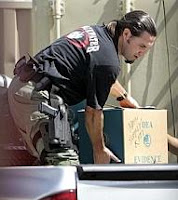 This is from the RawStory.com and the L.A. Times:
Deleted photo sparks fears DEA hiring mercenaries
Muriel KanePublished: Monday August 4, 2008
When a California medical marijuana dispensary, Organica Collective, was raided last Thursday by agents of the Federal Drug Enforcement Agency and local police, the Los Angeles Times ran a dramatic story on the incident, accompanied by a set of photographs showing the raid and its aftermath.
According to the Times, witnesses described the DEA agents as "removing computers, medicine and money, and using a steel cylinder battering ram to get into the upstairs bedrooms." When they left four hours later, all that remained was "trash, counters strewn with open and empty glass jars, piles of receipts thrown on the ground, upturned couch cushions, bits of marijuana on the edges of counters and an ATM with its doors torn open and emptied. ... An outdoor vegetable garden had plants uprooted, along with marijuana plants removed by the agents."
However, one particular photograph from the Times story has drawn more attention than anything else. That picture, which has now been widely reproduced at blogs, shows a long-haired man, wearing a Blackwater tshirt and with a pistol at his belt, passing a box marked "DEA Evidence" to other agents participating in the raid.
Blackwater, a private mercenary army often employed by the US government for security services and by local police forces for training, has drawn widespread criticism for its shoot-em-up tactics in Iraq and has recently aroused suspicion by its establishment of a private intelligence service and its growing role in global drug enforcement.
A medical marijuana website may have been the first to draw attention to the picture, noting, "We’re used to the DEA calling in help from various federal agencies and local law enforcement. But I guess none of their usual buddies were available yesterday because from the picture below, which appeared in the LA Times today, it looks like they had to resort to calling in Blackwater."
Read the rest of the story at the RawStory.com

Of course he could be a DEA agent wearing his "plain clothes".