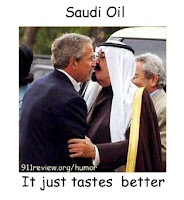 Tom, you do a great job at keeping this important conversation open. How we can move on from an event that still has so many unanswered questions is beyond me.

Perhaps when George Bush has been retired, we can start to get to the bottom of some of this stuff.

Tom,
Help a brother out! On one hand, you say Bush did 9/11. On the other, you say the Saudis did it. Which is true? (insert picture of Bush kissing the king here)

It has been long publicized that the Saudis want us as consumers, and we want their oil. The Kingdom has done little to stem the hate towards the west that the schools teach children. Imagine if Wal-Mart taught there employees to hate and unleash brutality on their customers…Oh wait, I think they do… Well, until Al Gore's Internet is 100% available to all Saudi's (tongue planted firmly in cheek), they will still be living in the stone-age. The only reason the Kingdom allows us in is because we protect them and their oil. As soon as we don't need their oil, the U.S. will be gone and so will their kingdom with no one to protect it from the rest of the middle-eastern barbarians that the Saudis have pissed off.

As far as 9/11 and Iraq, a person would have to be an idiot to link the two. It is not a matter of cause and effect; it is simply another chapter in a war that has been going since the dark-ages.

I don't remember saying that Bush caused 9/11. I do think that he did not try to stop it. He had intelligence and ignored it. He then falsified intelligence to get us into the Iraq war.
http://latimesblogs.latimes.com/presidentbush/2008/09/impeach-the-pre.html

I stand corrected. I thought I had heard you say that Pres. Bush was the real culprit behind 9-11but I must have misunderstood you.

I do not recall hearing Bush make any direct connection from 9-11 to Iraq. I remember there being a great deal of discussion about the presence of terror training camps. As I recall, the reason we went into Iraq was because Sadam was a threat to U.S. interests in the region because of his willingness to invade Kuwait, his open interest in invading Saudi Arabia, and his long history of using chemical weapons on his subjects and enemies.

Sadam deserved every bit of his hanging, and then some. However, our focus should have been on Afghanistan, Syria, Saudi Arabia, Yemen, and a bunch of other 3rd-world cesspools that teach that murder is the only way to deal with the west. The best defense is a strong offense. Unless we are willing to tear down the middle-east and do some serious nation-building, we need to bring ALL of the troops back home and shut down all of the borders and ports. Soon, the countries we used to protect will be falling to the fanatics. If think this economy is bad, just wait!

I'm not nearly as worried about fanatics taking over other countries as I am about the fanatics that have taken over this one.

Over a million Iraqis have been killed so far by America and her allies. Even if Saddam himself planned 9/11 and went to the media gloating about it, this "justice" is disproportionate and sickening, and represents the US as far more barbaric than the people in those "3rd world cesspools" could dream of being. Is beheading more or less barbaric than dropping a bomb on a children's hospital?

Unfortunately for the American people themselves (some bloodthirsty monsters notwithstanding), they don't deserve this reputation, as the protests against this war, before it even started, were record-breaking. People of all stripes and from all political persuasions had the courage to come out and say that the White House and the media are participating in complete, bald-faced lies, and those people were proven 100% correct as this farce unfolded. The corruption was so rank that the White House's program to pay journalists to plant fake news came out in the mainstream press.

I was blown away the other day watching some old news footage about the build-up to war with Nicaragua... and it struck me how they were peddling the exact same lies then that they peddle now.. I guess, if it ain't broke.. don't fix it.

The al-Saud "allow us in" because our leaders installed them and support them to this day, as they were brutal and ruthless enough to repress their people and keep the oil flowing -- and corrupt enough to give their fealty to the oil companies. They broke the OPEC embargo for us. If it weren't for US support, the house of al-Saud would have been torn to timbers long ago.