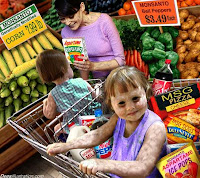 Consumers and Farmers Join Together to Promote Organic Integrity
CORNUCOPIA, Wisconsin - December 3 - Many media outlets, from the New York Times to the blogosphere, have tracked what has been dubbed the "corporate takeover" of organic farming. One of the hottest controversies in this rapidly growing $20 billion industry has been giant factory farms milking thousands of cows each in feedlots and masquerading as organic. Some of these industrial dairies are controlled by the nation's largest agribusinesses.
Since the organic community first appealed to the USDA for better clarification and enforcement of regulations requiring organic dairy producers to graze their cattle, nearly 9 years ago, the number of giant industrial dairy operations, with as many as 10,000 cows, has grown from two to approximately 15. After years of delay, the USDA has finally responded with a new proposed rule that they said would crack down on abuses.
See Entire Article at Common Dreams.org
(photo courtesy of www.deesillustrations.com )
Posted by Tom Sebourn at 12:54 PM