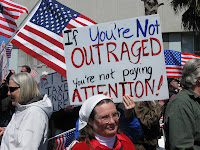 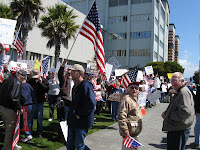 Hundreds of revolting tax payers came out in force today.
I find it hard to believe that all of these people attended the Tea Party at the Humboldt County Court House. Do any of them think that their federal taxes will be going up next year?
If they make less than 250-thousand dollars after deductions, they will be getting a tax break.
None the less, most of them seemed very patriotic but didn't fully understand what the Boston Tea Party was all about.
Here's some info from Thom Hartmann writing over at CommonDreams.org.

Published on Wednesday, April 15, 2009 by CommonDreams.org
The Real Boston Tea Party was an Anti-Corporate Revolt
by Thom Hartmann
CNBC Correspondent Rick Santelli called for a "Chicago Tea Party" on Feb 19th in protesting President Obama's plan to help homeowners in trouble. Santelli's call was answered by the right-wing group FreedomWorks, which funds campaigns promoting big business interests, and is the opposite of what the real Boston Tea Party was. FreedomWorks was funded in 2004 by Dick Armey (former Republican House Majority leader & lobbyist); consolidated Citizens for a Sound Economy, funded by the Koch family; and Empower America, a lobbying firm, that had fought against healthcare and minimum-wage efforts while hailing deregulation.
Anti-tax "tea party" organizers are delivering one million tea bags to a Washington, D.C., park Wednesday morning - to promote protests across the country by people they say are fed up with high taxes and excess spending.
The real Boston Tea Party was a protest against huge corporate tax cuts for the British East India Company, the largest trans-national corporation then in existence. This corporate tax cut threatened to decimate small Colonial businesses by helping the BEIC pull a Wal-Mart against small entrepreneurial tea shops, and individuals began a revolt that kicked-off a series of events that ended in the creation of The United States of America.
They covered their faces, massed in the streets, and destroyed the property of a giant global corporation. Declaring an end to global trade run by the East India Company that was destroying local economies, this small, masked minority started a revolution with an act of rebellion later called the Boston Tea Party.
Click for entire story.
Posted by Tom Sebourn at 3:56 PM

Methinks the genuine patriot movement is being co-opted and drowned out by party Republicans.

I rallied at a Tea Party in Yorba Linda (Orange County). I don't like the way the feds spend my taxes but my real motivation was from Sacramento and the IDIOTS that approved the budget. I also took the opportunity to protest Prop 1A.

pls8395, did you get your info about the event from Fox news or KFI?

pls8395,
Prop 1A, "Rainy Day" Budget Stabilization Fund.
State wide Special Election set for May 19th.
We can't print our own money and we have an economy the size of a large country, this makes sense on the cover. What do you not like about it besides more taxes.