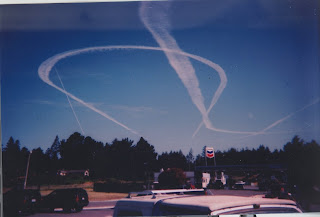 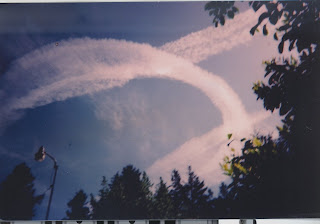 What is going on in the skies? Does anybody look up anymore? I awoke about a year and a half ago and saw this in the skies. I raced to the store in Trinidad and bought a disposable camera. I then took these pictures.
Do commercial jets get lost and do horse shoe patterns? Was it just sky writing in some language I don't understand? One thing for sure, this happens almost every day and YOU'RE BREATHING IT!

I report these when doing the weather on KGOE and nobody ever calls or questions me about it. We have smog controlls on our cars and stuff and this crap is supposed to be just fine?

Here's what some are saying about these.

I don't remember this growing up. This all seemed to start about 12 years ago and it's getting worse. We had contrails that dissapeared after a few minutes but not ones that spread out and became a hazy, overcast, rainbow sheen, planet cooling, blue sky robbing mess in the skies.

A discussion of rods and shadow people next, eh Tom? Sounds like a promotion for Coast-to-Coast with George Noury. Or re-runs of Art Bell.

I have some pretty spectacular optical gear that allows me to see every rivet on an aircraft at 40,000'. I have yet to see one aircraft with clear FAA identification, as federal regulations require, on it that was also creating a trail that did NOT burn off.
I regard myself as an educated professional as well as a professor in So. Cal. There is or should be some concern over what Tom is pointing out.

Yes, it could be true.

And the black numbered markings on the back of highway signs laying out a covert night time landing mechanism for government black hawk helicopters is a little creepy, too.

"And the black numbered markings on the back of highway signs laying out a covert night time landing mechanism for government black hawk helicopters is a little creepy, too."

That's a good one...! Where I live, they aren't covert. They land day or night at the missile silos in east O.C. They drop 15-20 regulars at a time. Then the gunships come in hot and low. Amazingly quiet until they are right on top of you. Humboldt residents are probably familiar with the way they sneak up on you...specially when you're out in your "field"...

ekovox, shadow people or rods? Why change the subject. The photos are what they are. Why do this over my house or your house for that matter? Do they look like rods to you? By the way, you are still breathing this crap.