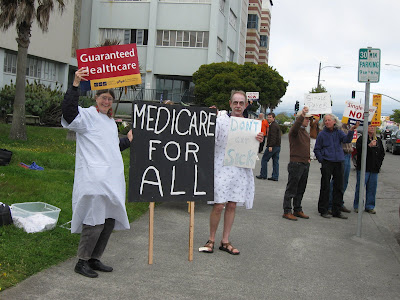 It started at 5 pm but I didn't get off work until after 5:30 so I got to the Humboldt County Courthouse just before 6 pm. I was handed a small hand bill that said:
PHYSICIANS FOR SOCIAL RESPONSIBILITY supports the right to health care. No nation can be healthy whose citizens are not healthy.
Call your Representative Mike Thompson 202-225-3311 and ask him to support the National Health Insurance Act HR 676
Call Senator Feinstein 202-224-3841 and ask her to support the Senate Companion Bill S 704
Call Senator Boxer 202-224-3553 with the same message.

An opinion piece by Star Parker in today's Times-Standard newspaper said that doctors didn't want this system, but doctors and nurses were behind today's event.
Star Parker supports the Republican plan that instead of covering everyone, would give tax breaks. What if you don't owe any taxes? Once again, a Republican program that favors insurance companies and those with jobs, money or that owe taxes.
The Democrats are also holding up Single Payer Health Care. Chairman of the Finance Committee, with jurisdiction over the major public health insurance programs, Democratic Senator, Max Bacus said he doesn't want to waste his time on S 704
http://www.kevinmd.com/blog/2009/02/max-baucus-on-single-payer-im-not-going.html
http://missoulian.com/articles/2009/05/29/news/local/news02.txt

This is one area you aren't going to get an argument from me. Provided the government can do it without our punishing the people belonging to the out of power party...and don't pretend for a minute it doesn't go on. The big problem as I see it is the rationing. It is going to kill an awful lot of old people in favor of young productive workers. The more civilized we get....the more we revert to the design = function of the past. Putting the old out onto ice flows. There just won't be enough money.

Tax breaks for the poor for health insurance is stupid. I agree with you on that. How we implement any national health care is another problem.
Doctors and attorneys run the HMO's now. Do we really want government in the doctor's office? How would you get your medicinal marijuana card if the Feds are overseeing your medical care?

i like the protest of eureka. though they are a big business on the market, and everybody knows them, sometimes a protest is good.