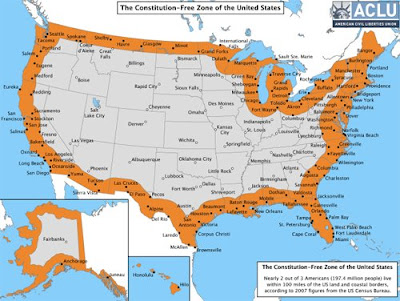 WASHINGTON – The extraordinary powers of customs and border agents to invade the privacy of individuals at the U.S. border are spreading inland and creating what amounts to a “Constitution-free Zone” that covers fully two-thirds of the American population, the American Civil Liberties Union said today in a press conference at the National Press Club in Washington, DC.
“The authorities can do things at the border that they could never do to citizens and residents inside our country under the Constitution,” said Caroline Fredrickson, director of the ACLU Washington Legislative Office. “Yet the government is asserting that some of these powers extend as far as 100 miles inside the actual border. It is a classic example of law enforcement powers expanding far beyond their proper boundaries – in this case, literally.”
Read Full Story Click Here
Posted by Tom Sebourn at 1:37 PM

I can't even get my head around this! A constitution free zone? To understate the obvious, this can not be good. I read a scary article on The Hill about police getting ready for riots
Police departments in cities across the country are beefing up their ranks for Election Day, preparing for possible civil unrest and riots after the historic presidential contest.

Public safety officials said in interviews with The Hill that the election, which will end with either the nation’s first black president or its first female vice president, demanded a stronger police presence.

"It is a classic example of law enforcement powers expanding far beyond their proper boundaries – in this case, literally.”

Who decides what is "proper"? I think ICE should be able to enforce laws equally throughout the U.S. If the laws are inappropriate, change the laws; but enforcement must be equally uniform across the U.S.

As for the 100-mile buffer, I trust the ACLU as much as I trust the National Inquirer! For as much havoc as they create, they do very little good.

pls8395, As for the 100-mile buffer, I trust the ACLU as much as I trust the National Inquirer! For as much havoc as they create, they do very little good.

Remember that the National Inquirer seldom looses lawsuits due to their reporting. The ACLU by it's nature has to take on lawsuits that no one else would dare.

Let's play Shock and Awe for a minute.
Suppose the election results were messy, with McCain declared the winner by vote but with Obama understood to become the president after 'it is all sorted out'. That would cause a great deal of reaction and distraction.
During this time of reaction we might just 'need' a little Marshal Law.
And during this time of Marshal Law and pending Obama-ness the stock market might find new lows and maybe a bank or two could close. And the 12th district of the fed could get more self destructive and self serving.
And for a bit more shock,what if something happened to our oil refineries. That would be shocking and disruptive. That would hit the commoner right in the store shelf.
So we could have election uncertainty, a good dash of Marshal law and social unrest, and an interruption in our transport systems. Have I left anything out?

Kathy, maybe you have left out the possibility of a peaceful revolution. In a time of marshal law, what if everybody brought cookies and coffee to the troops stationed in their neighborhoods. What if they had to see us face to face and get to know us. Could we win over their hearts? Probably not, but it might be a better idea than taking up arms against them or just rolling over and letting our country go away.

Perfect answer Tom!
I really do appreciate your reply.
In order to get my 'head around' some of the stories out there, I took it to an extreme. I don't want to be shocked again.
Problems can be engineered, manufactured and as you point out so can solutions.
As for cookies, can they be baked on a BBQ?

To bake cookies on a BBQ use foil and a lid. Troops also like anything fresh as opposed to the crapy KBR food that has sickened many of them in Iraq. IF they use Blackwater Troops, we might want to rethink the arms thing.

Be prepared, be very prepared. A Weber on every corner. We meet then on the highway with our best chief's. We flood the air with the smell of fresh baked bread.