ACLU 'Concerned' After Students Told Not To Say Obama 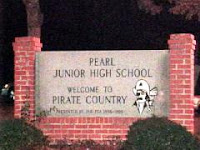 This from WAPT.com, ABC news affiliate in Mississippi.
PEARL, Miss. -- The American Civil Liberties Union of Mississippi said Friday that it had received numerous reports from throughout the state from parents and students regarding alleged violations of students’ free speech following Tuesday’s election.
On Thursday, the Pearl Schools superintendent said that a school bus driver and a coach were disciplined for allegedly telling students not to say President-elect Barack Obama’s name.
Reporters with 16 WAPT News received several calls from upset parents that said a school bus driver told the children on a Pearl school bus that if they said Obama’s name, they would be written up and taken to the principal’s office for disciplinary reasons.
Click for entire racist story
In California, blacks vote to discriminate against gay marriage. In Mississippi, whites still discriminate against blacks. This country may have come a long way recently but we still have more than our share of bigots! Anyone still want to get rid of the ACLU?
Posted by Tom Sebourn at 3:18 PM

Labels: ACLU Mississippi, Racisim in Mississippi is alive and well, Students not allowed to use Obama's name

The ACLU may have a role to play in our society.

So, because a minimum (or minimally paid) bus driver and a coach (track & field?, football?, soccer?, swimming?) were taking out their political frustration on students the ACLU has to come in and flex their righteous muscle? That sounds kind of like calling in the National Guard to clear pot farms... Perhaps a little overreaction.

That said, students, staff and faculty must all be more tolerant- it's a two-way street. If the students had been traumatized by Obama loosing, the bus driver shouldn't be rubbing it in either.

I think the ACLU's best days were 20 years ago.