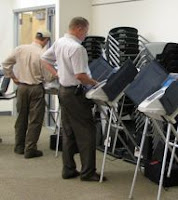 An election monitoring group is asking officials in Virginia to address reports of massive voting machine failures and voters being turned away from polls, and it may go to court if no action is taken. Election Protection, a nonprofit group aimed at cataloging and correcting problems at the polls, says it has received more than 27,000 calls from voters since 5 a.m. Tuesday. Most problems have been reported in Pennsylvania, Virginia, New Jersey and Florida, representatives of the group said. Voters experiencing problems can report them by dialing 866-OUR-VOTE or 866-MY-VOTE1."We don’t want to be chicken little here,” said Jonah Goldman, who directs the Lawyers' Committee for Civil Rights Campaign for Fair Elections. "What we’re trying to do is report what we’re seeing out in the field. Unfortunately this is what we expected.”During a press conference Tuesday morning, group representatives said they were asking election officials in Virginia to extend voting by two hours. The group also wants election to ensure that paper ballots are available in precincts where electronic voting machines break down. If elections officials fail to act, the group could file a lawsuit in federal court, but it hopes to avoid that option.
Click for the rest of the story.
Posted by Tom Sebourn at 1:12 PM