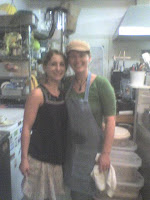 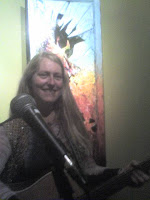 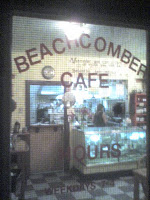 Last night I was informed that one of my friends would be performing in Trinidad. With little notice, I decided to check out the gig at the Beachcomber Cafe. Known mostly for it's Fair Trade Coffee drinks and soup, I was delighted to find out that they had beer and wine as well as other goodies. Last night they were serving fajitas with either tofu or pork. The place isn't real big but is cozy.
Penny Gunn, who runs the Trinidad Artisan Market during the summer, was the solo artist I had come to see. She played a mix of originals and cover tunes to a crowd that sang back on many songs. Everyone had a great time. Who would have thought that so much fun could be had on a Monday night in downtown Trinidad Ca. She was supposed to finish by 9pm but the crowd would have none of it. By about 9:30 things started to wind down and I ended up talking to some people outside about things in the sky. Wow, two of my favorite things, beer and things in the sky and all right down the street from my house.
Alice Vasterling, has owned the Beachcomber Cafe for 5 years now and she and Olivia Seoville served the crowd with a smile. (Alice is the one in the hat).
For a hot bowl of soup, great coffee drinks, organic food and sometimes, entertainment, I recommend ducking into the little cafe next to the town hall in Trinidad.
Posted by Tom Sebourn at 11:22 AM