Disrespect The Homeless And You Might Be Disrespecting Our Troops 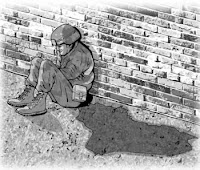 This is from the San Francisco Chronicle:
Iraq and Afghanistan War Veterans Join The Homeless
by Anne Sussman
SAN FRANCISCO - Ethan Kreutzer joined the Army at the age of 17 and fought with the 19th Airborne in Jalalabad, Afghanistan. When he retuned home, he had no money, no education and no civilian job experience. He soon became homeless. He slept in an alley off Haight Street, behind two trash cans.
June Moss drove from Kuwait to Iraq as an Army engineer in a truck convoy. When she returned to the United States, she lost her home, and drove her two young children from hotel to hotel across Northern California.
Sean McKeen, a hardy, broad-shouldered 21-year-old with a wide smile, went to Iraq to clear land mines, and to get money for college. When he returned home, he became homeless in less than a week. He found himself sleeping in a cot in a crowded homeless shelter in San Francisco.
They are all part of a growing trend of homelessness among returning war on terrorism veterans.
More than 2,000 military personnel return home to California each month. Most have no specialized job experience, education or an easy familiarity with civilian life. And many have post traumatic stress disorder (PTSD), making it difficult to get along with friends and family, and almost impossible to hold down a job.
Click for entire story
Posted by Tom Sebourn at 12:45 PM