Say Goodbye To Peter B. Collins 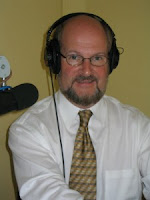 I got the news this evening that the Peter B. Collins show heard live on KGOE from 3 to 6pm weekdays, has just one more week on the air.

Peter has had a hard time getting larger radio stations to pick up the show and he is self syndicated and pays his own bills. He told me tonight that Friday the 20th. of March is his last show.
Peter B. Collins will make the announcement tomorrow on his show.
I have considered Mr. Collins a good friend in the business and an excelent talk show host.
His style, grace and wisdom will be missed on the airwaves.
He hasn't ruled out doing a weekend show sometime in the future.
Tune in for more info.
Posted by Tom Sebourn at 7:50 PM

The Peter B show has been educational
and inspiring. He says he only needs $5,000 a month to stay on the stations that he currently serves. Is there any way that KGOE listeners can help support him so that we can continue to enjoy his show?

It would be a large undertaking I'm afraid. The satellite transmission cost alone are like a modest house payment. Add in the special phone lines that go to the uplink where the show goes up to the satellite, the toll free call in number and keeping equipment running. Add in office costs and Katrina Rill and the engineer, yeah about 5 grand is about right.
That doesn't probably doesn't include much, if anything for Peter B. I do think that if the show could break even, he would give us a couple more years to see what happens. He loves radio like those of us in the business do.

That's not a real answer though so does anybody else have any ideas?

When he was speaking with Brad they talked about an angle, someone who could pick up the $5,000 a month tab. Brad has an article about it on his blog.
Peter B is very good. It will be hard to replace him. I would like to keep him if we could.

Peter B, is not replaceable.
We will have other programming but no one has asked me what that will be yet.

That's too bad. Of all the leftists, he's not so bad...He's actually quite good. He'll be missed.

Peter said on today's show he will decide for sure tomorrow morning whether there is enough support to even try to retract his cancellation announcement. Support in this case means pledges of $$ from listeners. Best to e-mail him immediately: peter@peterbcollins.com.

He also has a donation button on his website to make an instant direct payment:

Peter B. says he will probably do a podcast starting around June. I will have a link to it on our blog so that some can play that between noon and 3pm unless our line up changes by then. How can I say it without saying it? Noon to 3pm isn't very progressive.